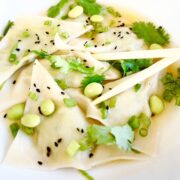 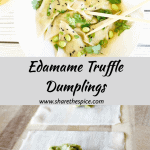 The first time we ordered some edamame truffle dumplings at a restaurant, we were in love. My husband could have that as a main dish every single day. So of course, we went on a mission to make these at home and I’d say they’re just as good!

See here for more information about the Fond App.

Initially, the thought of trying to make dumplings intimidated me. But guys, it’s SO easy. Just buy some wonton wrappers, throw some ingredients into a food processor for the filling, and cook them in water or a broth...and there are your dumplings.

Instructions to make the dumplings

My wonton wrappers were egg-free which makes this dish vegan. For the edamame mixture, I blend all the filling ingredients in a chopper like this one or a Vitamix blender attachment like this one. I like to give it a hummus-like texture, smooth and creamy. I filled the wonton wrappers with the edamame truffle mixture. To fold the wrappers, take a bowl of water, wet the edges and press along the sides. I also cut the excess edges off the folded triangles (and air-fried them as wonton chips!). Cook the filled triangles in a broth for a few minutes or serve them with any of your favorite sauces or even pan fry them for a bit of a crunch.

We can't get enough of these life-changing and super easy dumplings. Enjoy your edamame truffle dumplings and share them with your friends and family!

Other Recipes to Try: