Churros energy bites made with walnuts, almond butter, oats, cinnamon, vanilla, and sweetened with maple syrup. Coated with cinnamon sugar and chocolate cinnamon sugar to give it the perfect churros flavors!
Jump to Recipe Pin Recipe 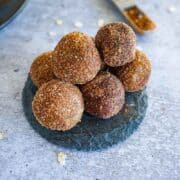 Okay...so after a lot of quarantine baking, I decided I needed a healthy-ish twist on a dessert for Cinco de Mayo. Enter...Churros Energy Bites. Is that a thing? Well, we are going to make it a thing! The perfect bite-sized, healthy-ish dessert (or snack!). These are filled with protein and coated in cinnamon sugar and a chocolate cinnamon sugar. SO GOOD.

These are so easy to make. I made them within 15-20 minutes and was snacking on them IMMEDIATELY.

These Churros Energy Bites are:

To put it all together, blend all of the ingredients together. Then, coat half of them in cinnamon sugar and half in chocolate cinnamon sugar. You can also coat them all in just one if it's your favorite! I personally loved having an option of chocolate or no chocolate :). You can add in other extras like flax powder, chocolate chips, chia seeds. Get creative!

I like to pop them in the fridge and when I need a snack or need to satisfy my sweet tooth, those churros flavors are right there waiting for me. Just in time for my Cinco de Mayo quarantine dessert 🙂 .

Don't forget these other Mexican flavors to try for your Cinco de Mayo feast: 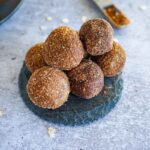 For the Cinnamon Sugar Coating

For the Chocolate Cinnamon Coating:

For the Cinnamon Sugar Coating:

For the Chocolate Cinnamon Sugar Coating: