Apple pie bites made with delicious apple pie filling inside phyllo shells topped with toasted pecans. A perfect appetizer, dessert, or even a fun snack!
Jump to Recipe Pin Recipe 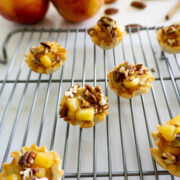 Why is apple pie just a holiday flavor and not a year round thing?? The smell of these delicious Apple Pie Bites reminds me of the holidays but I'm definitely making these year round. They're adorable little bite sized phyllo shells with an apple pie filling.

These Apple Pie Bites are:

How to make these Apple Pie Bites:

What if you don't have phyllo shells?

If you don't have access to phyllo shells, can't find them, or they aren't in your budget, I have used the filling as a dip with some pita chips or graham crackers and it tastes amazing!

These bites make a great appetizer, quick dessert, or even a fun snack! Good luck not eating them up right away!

Other bite-sized recipes you may love: 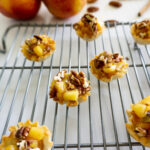 Add water 1 tablespoon at a time if your apple mixture gets dry and is not syrupy enough.